Skip to content
As a scientist sharing the results of our work on social media, so that anyone interested may benefit from our findings, I usually follow Brancolini’s law: « the amount of energy needed to refute bullshit is an order of magnitude bigger than to produce it ». The game is unfair since anyone can write anything on any topic so the source of BS is unlimited, which makes the amount of energy necessary to refute it greater than infinite.
However, sometimes, it is necessary to correct false statements and judgments when they directly target our work, even when not citing us directly. Below a series of recent statements about us “young guns” not respecting/knowing pioneers in their field, and thinking they have invented the concept of Force-Velocity profile. Although not directly named, it is clear that the “young guns” here are my collaborators and myself (we cumulate several flaws mentioned here: scientists, 25-38 yrs old, working on FV profile, using radar gun, getting some attention from the coaching community, from beginners to elite). If we were not the ones mentioned here (P Samozino, M Cross, S Brown, P Jimenez-Reyes, et al. see our papers for full group details), then authors of these statements should clarify exactly who was. I don’t see other colleagues matching all these characteristics, yet. But the exact scientists criticized here have not been named, so easy to refute and say we’re wrong and paranoid/egotistic. Anyway, it is so obvious that colleagues & friends have sent me emails today to comment on these statements. By the way, when asked directly to tell who were the “young guns” and “some scientists” mentioned, the authors of these unpleasant statements did not answer this very clear question.
Discussion here:
https://twitter.com/sprintcoachSWE/status/844916642920333313

The funny thing here is that we, especially Dr Samozino and myself, oldest among the young guns,were born and raised as sport scientist and athlete/coach with Bosco’s works. In fact, Carmelo Bosco has obtained a PhD at the University of Saint-Etienne in 1992, in the same Univeristy and same lab as we did. Bosco’s PhD and book were the first things we read when our PhD supervisor (and Bosco’s close collaborator and co-inventor), Pr Alain Belli started supervising our Masters work. Our entire PhD environment was influenced by “what about the fucking velocity?” and other famous quotes and anecdotes from Bosco and Belli’s collaboration time.
Sorry if you don’t read French 🙂 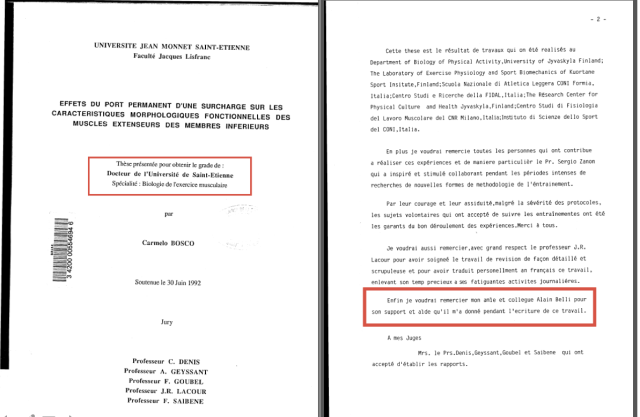 I was in Italy doing my PhD in Pr diPrampero’s laboratory at the University of Udine when Bosco passed away, and I’ll always remember the deep sadness felt by our scientific community.
So yes, we perfectly know Bosco’s work, even those only available at our former lab in Saint-Etienne, France, old VHS tapes and yellow lab experiment pictures or handwritten notes. By the way, people who actually read our work will easily see that Bosco’s works are cited and form the basis of our entire approach. One of the main lies posted recently is that we “think we invented” the concept of F-V profile. This is unfair, we just actually based our work on this concept, to take it to another, innovative level. We stand on his giant shoulders, and those of Hill, Margaria, etc… This is for instance explained in our 2012 paper: 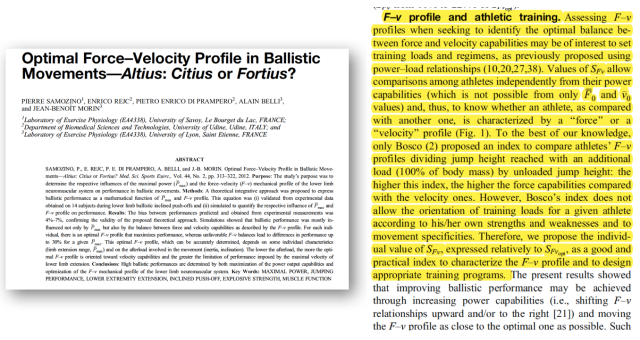 I should double check but I’m almost sure every single paper we published on F-V profile in jumping cites Bosco’s works, but yes, there is no worse blind man than the one who doesn’t want to see…
For instance, all students, coaches and researchers who have attended one of our talks on this topic know that the very beginning of the entire talk is this graph…from Bosco, from which all our “young guns” further analyses and works stem…

Posting wrong judgments about “some scientists” you don’t name clearly, without even knowing them is unfair, to say the least. I don’t comment/criticize on the work coaches do with their athletes, because I don’t feel competent enough…I wish everyone had the same humble and fair state of mind, and thought twice before posting uninformed BS about researchers or their work. As usual, the answer to this post will be “don’t take it personally”, “you were not the target”, “we appreciate your work”, “this is a proof you’re egotistic”, etc…typical process of unclear doublespeak.

« We respect the past, but we don’t pine for it. We don’t fear the future; we grab for it »

This site uses Akismet to reduce spam. Learn how your comment data is processed.